Aram Gragossian received his Ph.D. in Optical Science and Engineering from University of New Mexico in 2017. Intrigued by ultrafast optics and laser cooling research, Aram decided to join professor Mansoor Sheik-Bahae’s group. Dr. Gragossian has worked on a variety of topics including laser ablation, ultrafast phenomena, time resolved spectroscopy, laser cooling of solids, and lidars.
He joined Coherent Applications, Inc., in 2017 to provide research support the development and testing of NASA’s space-flight Navigation Doppler Lidar (NDL) and non-mechanical beam steering. Aram’s wide range of expertise enabled him to lead the design of the elector-optics module of NDL. In 2020 Dr. Gragossian joined NASA Langley Research Center remote sensing branch as the NDL electro-optics lead. He has contributed to design, build, and testing of 4 space-flight units. Two of the devices are schedule to travel to the moon in 2022 to provide accurate range and velocity measurements during landing.

David Valdés earned his M.S. in Optical Science and Engineering at the University of New Mexico (UNM) in 2019 under the supervision of Dr. Jean-Claude Diels, author and Professor of Physics and Astronomy at UNM. David worked as a part-time student for the duration of his master’s program.

David currently serves as an Interim Associate Dean in the School of Adult and General Education at Central New Mexico Community College (CNM).

David taught math for two years at West Mesa High School before beginning work as a member of the full-time math faculty at CNM in the School of Adult and General Education. In addition to his faculty position, he also worked as a CNM Presidential Fellow, and Faculty Senate Chair.

After completing his master’s degree at UNM, David was offered an interim associate dean position to fill one of two positions that became vacated. In this role, he has helped see the college through the ups and downs of navigating COVID-19 while managing faculty schedules and serving on various college committees. David also directs the Adult Basic Education program which oversees state and federal grants to help students learn English and attain their high school equivalency. Complementing his work at CNM, David serves as a full board member of the Workforce Connection of Central New Mexico, which strives to address the workforce needs in the central region. 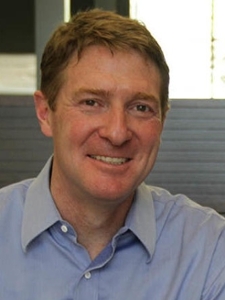 Scott Diddams is a Fellow of the National Institute of Standards and Technology (NIST) and an Adjoint Professor at the University of Colorado, where he carries out experimental research in the fields of precision spectroscopy and metrology, nonlinear optics, microwave photonics, and ultrafast lasers. He received the Ph.D. degree from the Optical Science and Engineering Program at University of New Mexico, (UNM) in 1996. His research advisor at UNM was Professor Jean Claude Diels. From 1996 through 2000, he did postdoctoral work at JILA, NIST, and the University of Colorado. Since 2000, Diddams has been a research physicist at NIST where he has pioneered the development of optical frequency combs and their use in optical clocks, tests of fundamental physics, novel spectroscopy in the visible and mid-infrared, and ultralow noise frequency synthesis. In recent years, special attention has been given to infrared frequency comb sources as well as high repetition rate laser-based and microresonator frequency combs, which are being explored for applications in microwave photonics and astronomy. Among many awards, Dr. Diddams received the Department of Commerce Gold and Silver Medals for “revolutionizing the way frequency is measured”, as well as the Presidential Early Career Award in Science and Engineering (PECASE), and the IEEE Rabi award. He is a Fellow of the Optical Society of America and the American Physical Society and a Senior Member of IEEE.

Jeffrey W. Nicholson earned his Ph.D. in Optical Sciences at The University of New Mexico (UNM) in 1997. Nicholson was a student of Dr. Wolfgang Rudolph, the current Department Chair and Regents’ Professor of Physics & Astronomat UNM. He gained his Bachelor of Science in Physics at the University of Houston in 1991.

Currently, Dr. Gamiz is the Principal Investigator for the U.S. Air Force Research Laboratory (AFRL) and director of the Space Situational Awareness mission at AFRL/Space Vehicles in Albuquerque. He is also an Assistant Adjunct Professor with the Air Force Institute of Technology. In 2017, Dr. Gamiz was elected as an OSA Fellow.

Col. Russell Teehan earned his Ph.D. in Physics & Optical Science at The University of New Mexico (UNM) in 1999, under the supervision of Wolfgang Rudolph, who is a Professor and the Chair of the UNM Physics and Astronomy department at UNM.

Currently, Col. Russell Teehan is the director of the Air Force Research Laboratory Space Vehicles Directorate and the commander of Phillips Research Site at Kirtland Air Force Base, N.M. He leads a team of 809 military, civilian and on-site contractors who comprise the nation's center of excellence for military space science and technology, research and development, as well as advanced technologies integration and demonstration. His organization manages an annual budget of $307 million, focused on enduring Air Force space missions: communications; position navigation and timing, missile warning, space situational awareness, and defensive counter space.

Dr. Ganesh Balakrishnan earned his Ph.D. in Physics & Optical Science at The University of New Mexico (UNM) in 2003, under the supervision of Kevin Malloy, who was the Vice President of Research and Economic Development at UNM.

Currently, Dr. Balakrishnan is an Associate Professor and Associate Chair for the Department of Electrical and Computer Engineering at UNM.  Dr. Balakrishnan’s primary research focus for the past decade has been the growth and characterization of highly mismatched III-Sb compound semiconductors on GaAs and Silicon substrates. The specific contribution made by Dr. Balakrishnan to this area of research is the novel use of interfacial misfit dislocation arrays in enabling low defect-density, bufferless, monolithic integration of III-Sb on GaAs and Silicon substrates for increased antimonide device functionality on mature platforms. His body of work using molecular beam epitaxy has resulted in over 60 peer-reviewed publications, 30 conference presentations and several patents.

Dr. Denis Seletskiy earned his Ph.D. in Physics & Optical Science at The University of New Mexico (UNM) in 2010, under the supervision of Mansoor Sheik-Bahae, Professor and OSE General Chair at UNM.

Currently, Dr. Seletskiy is an Assistant Professor at the Department of Engineering Physics at Polytechnique Montréal.  The primary aim of his research is to develop novel photonics tools and apply them to study quantumness of interacting light and matter toward real world high-technology applications. His other research interests include laser cooling of solids, nonlinear optics, nanophotonics and the development of new tools for optical precision metrology.

Dr. Zeringue received his Ph.D. with distinction in Optical Science and Engineering from the University of New Mexico in 2011 under the supervision of Dr. Iyad Dajani.  His dissertation focused on theoretical and experimental investigations of Stimulated Brillouin Scattering (SBS) mitigation techniques in fiber amplifiers. Dr. Zeringue was awarded two U.S. patents (US 7,764,720 B1, US 8.462.426 B1) based on his SBS suppression techniques, which led to unprecedented output powers in single-frequency Yb-doped fiber amplifiers. He worked as a Laser Research Physicist for the Air Force Research Laboratory (AFRL) where he earned multiple awards including: Scientist of the Quarter and Best Poster Presentation by the USAF Scientific Advisory Board (SAB) for two consecutive years. Dr. Zeringue developed an in-house laser modeling software package which was published in an AFRL success story and was an invited topic at Wolfram Mathematica’s annual international summer program. He earned a postdoctoral fellowship in the Radiation Physics department at the University of Texas MD Anderson Cancer Center,  where he developed fiber-optic based sensor technology to monitor radiation dose during cancer treatments.