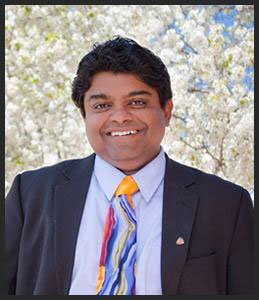 Piscataway, New Jersey, USA, January 2014: Sanjay Krishna, Director of the Center for High Technology Materials at the University of New Mexico in Albuquerque, New Mexico, USA, has been named an IEEE Fellow. The Professor and Regents’ Lecturer of Electrical and Computer Engineering is being recognized for contributions to infrared detectors and focal plane arrays. Krishna’s pioneering work in infrared sensing has led to advances in areas such as space-based atmospheric sensing and the development of next generation sensors for defense applications. These sensors also have a variety of civilian uses, from helping fire fighters “see through smoke” and locate people trapped in a fire to aiding pilots looking for a landing strip during inclement weather. By increasing the temperature at which these detectors can operate and by lowering their cost, his research is also enabling the improved and non-invasive detection of skin cancer, arthritis and diabetic neuropathy. Krishna’s work in early skin cancer detection, in particular, could save millions of lives.

The IEEE Grade of Fellow is conferred by the IEEE Board of Directors upon a person with an outstanding record of accomplishments in any of the IEEE fields of interest. The total number selected in any one year cannot exceed one-tenth of one- percent of the total voting membership. IEEE Fellow is the highest grade of membership and is recognized by the technical community as a prestigious honor and an important career achievement.

Krishna is best known for his development of novel midwave/longwave infrared detectors and focal plane arrays (FPA) based on the quantum-dot-in-a-well (DWELL) design. (An FPA is made up of a matrix of light-sensing pixels and functions like camera. Quantum dots are nano-sized semiconductor crystals). His group demonstrated the first DWELL detector and the first DWELL FPA. Today, more than 10 research groups around the world are researching DWELL detectors, and NASA has integrated the DWELL design into a megapixel FPA. Krishna has also pioneered the use of superlattices (periodic and layered semiconductor structures) in FPAs and detectors. Five infrared manufacturers in the USA, Israel and Sweden are currently producing these detectors. Like the DWELL technology, these devices can operate at higher temperatures than competing detectors, allowing them to move out of the laboratory and into the world. For this and other work, Krishna has authored more than 300 publications, which have been cited 3833 times (H-index of 35) and has been six issued patents.

Krishna received his Masters in Physics from the Indian Institute of Technology, Madras in 1996, MS in Electrical Engineering in 1999 and PhD in Applied Physics in 2001 from the University of Michigan, Ann Arbor. He joined the University of New Mexico as a tenure track faculty member in 2001. In addition to his other positions, Krishna holds an Endowed Chair in Microelectronics and is the co-founder and Chief Technology Officer of SKINfrared LLC. For his contribution to DWELL detector technology, Krishna was awarded the Defense Intelligence Agency Chief Scientist Award, the IEEE Nanotechnology Council Young Investigator Award, the Young Scientist Award from the International Symposium on Compound Semiconductors and the SPIE Early Career Achievement Award. He also received the Senior Research Excellence Award from the UNM School of Engineering in 2009, UNM Teacher of the Year in 2010 and was elevated to the grade of Fellow of SPIE in 2010. Krishna has contributed to many conferences including serving as the co-chair of the North American Molecular Beam Epitaxy Conference and chair of the program committee on Optoelectronic Materials and Processing for the IEEE Photonics Society. In addition, he has been associate editor of IEEE Transactions in Nanotechnology and IEEE Photonics Technology Letters. He is currently the faculty advisor for the student chapters of IEEE-HKN and SPIE.

The IEEE is the world’s leading professional association for advancing technology for humanity. Through its 400,000 members in 160 countries, the IEEE is a leading authority on a wide variety of areas ranging from aerospace systems, computers and telecommunications to biomedical engineering, electric power and consumer electronics.

Dedicated to the advancement of technology, the IEEE publishes 30 percent of the world’s literature in the electrical and electronics engineering and computer science fields, and has developed more than 900 active industry standards. The association also sponsors or co-sponsors nearly 400 international technical conferences each year. If you would like to learn more about IEEE or the IEEE Fellow Program, please visit www.ieee.org.