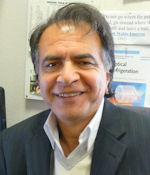 The Optical Science and Engineering program is proud to announce that Co-Chair, Mansoor Sheik-Bahae has been promoted to Distinguished Professor.

Mansoor Sheik-Bahae has achieved worldwide fame in his most recent work in laser-assisted cooling, where he has held the world record for the lowest temperature reached in the solid state in a laboratory. His previous work in the Z-scan technique, now a standard tool in most nonlinear optics laboratories around the world, has been equally seminal. He has published in the areas of laser cooling in solids, ultrafast nonlinear optics, and nonlinear optics.

Sheik-Bahae is the Director of the Sheik-Bahae Research Group, which focuses on laser cooling in solids, ultrafast phenomena and nonlinear optics.

He has worked at the University of New Mexico since 1994, and has been awarded over $14 million in research grants since 1995. He has edited seven books and has four U.S. patents, and another four which are pending.

Congratulations to Professor Sheik-Bahae on this well-deserved promotion.